In recent years, the Grand Rapids area has been bustling with an influx of new businesses, restaurants, entertainment venues and breweries. These new additions have revitalized some of the historic downtown areas and revealed what some residents knew all along – Grand Rapids is full of great architecture in unexpected places. Thanks to historical structures and new builds, Grand Rapids is looking better than ever.

Grand Rapids residents take a similar pride in their homes, and many area neighborhoods are busy with upgrades, restorations, and even new builds. If you currently own a home in the Grand Rapids area, it is likely that you, too, wish to improve the external aesthetics of your home. Or, perhaps you’re undertaking a new build and are in the midst of making decisions regarding the style and architecture of your project.

Windows Are Key to Your Home’s Aesthetics and Function 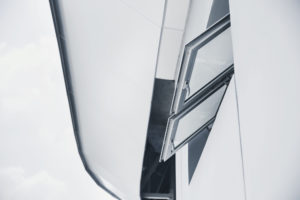 Whether you’re building a new home or simply replacing older windows, choosing the right type of window is one of the most important decisions you can make. Not only do windows affect the exterior style of your home, but they lend a large hand to your interior decorating as well. As such, the various types of windows can alter the look of your home quite significantly.

Similarly, each type of window functions a bit differently and offers a slightly different set of features. If you have specific needs, such as unobtrusive ventilation or ease of access, the right type of window can make a huge difference. In either case, it is important to choose a window that will continue to meet your needs for years to come, and for many, that means including awning and hopper windows.

What Are Awning and Hopper Windows?

For the most part, awning and hopper windows appear the same when they are closed. In fact, they resemble traditional casement windows, with a solid frame and hinge to facilitate opening the sash. However, there are a few key differences.

Primarily, the hinges on awning and hopper windows are positioned on the horizontal surface of the sash. Conversely, hinges on traditional casement windows are positioned on the vertical surface. As a result, awning and hopper windows swing the top or bottom edge of the window away from the flat vertical plane of your home instead of rotating the window out and away from the wall.

A Brief History of Awning and Hopper Windows 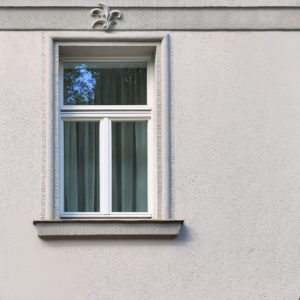 As you might imagine, awning and hopper windows derive their names, respectively, from fabric window awnings and market hoppers for foods. In particular, the fabric window awning has inspired the design and the function for the awning window. Fabric window awnings have been around since ancient Egyptian times, when the original users used similarly-shaped pieces of fabric propped up with sticks to protect market stalls from light rainfall.

Some of the earliest moving or openable windows were awning windows, and early window users would prop them open with sticks to prevent the window from falling closed. These windows provided a building’s occupants with much-needed air circulation in a time before electric fans and air conditioners existed. As a functional derivative of awning windows, hopper windows provided similar ventilation without the need to be propped open.

The other crucial function of awning windows in the early days is also shared with fabric window awnings. The ability to shield the interior of a structure from light rain allowed occupants to keep awning windows open for air circulation, even during a storm. As a result, awning windows quickly became the preferred type of window.

Are Awning and Hopper Windows Right For You? 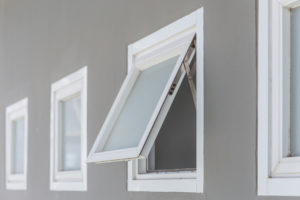 As you may have suspected, one of the primary features Grand Rapids residents cite for choosing awning and hopper windows is their excellent ventilation capability. When you place multiple of these windows in a single room or throughout a home, you can allow a fresh breeze to circulate. In the right conditions, increasing the airflow through your home can help you avoid using your HVAC system during temperate months and lower your energy bills.

One of the primary functions of any window is to allow natural light into the interior of a structure. Awning and hopper windows are no different, and can bring light to spaces larger windows cannot, with the additional benefit of ventilation. You’ll find that the various sizes of these windows allow you to add light practically anywhere in your home.

Because of their design, awning and hopper windows can be made in a variety of different sizes and offered as a part of a double-hung window or on their own. Over the years, designers have discovered that awning and hopper windows can be an excellent solution for smaller spaces. If you have a confined space like a small bathroom or kitchen and wish to add natural light or ventilation, these windows are ideal.

Although awning and hopper windows were designed to let cool breezes into your space, they also do a great job of keeping unwanted elements out of your home. As mentioned previously, awning windows shield the interior of your home from light rains; meanwhile, hopper windows can provide ventilation while preventing dust from entering. As an added benefit, ground-level awning windows in basements add natural light and ventilation without allowing intruders.

Consider Awning and Hopper Windows for Your Home

If you are looking for a window to fit any design sensibility while adding light to even the smallest of spaces, awning and hopper windows may be for you. Their unique ability to provide ventilation without allowing rain and dust to enter your home make them ideal windows for Grand Rapids’ spring and fall weather. Ask a window installer near you about awning and hopper windows today.